To date, The Manhood Project has served over 900 students, fourteen schools, several districts, and communities since 2012- through direct programming and independent workshops.  Over the years, we’ve consistently found that:

Over 70% of students who participate in The Manhood Project go on to college or job training programs immediately after graduating high school. Each year students of all ages share personal testimonies, thank you letters and heartfelt gratitude for the opportunity to work with TMP. 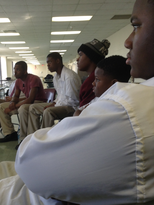 Through our workshops, various activities and field trips, we have watched young men make great improvements. Young men like Joseph Moore. Prior to starting the program at Marvin Winans Academy, Joseph Moore was described as a challenging young man. He was known to be argumentative, disrespectful and loved to be the center of attention. Once we met Joseph, Coach Black quickly understood how he got his reputation. Yet rather than a problem, Coach Black saw him (and later helped Joseph to see himself) as a leader. Through numerous workshops, opportunities to lead discussions and mentoring his peers, Joseph made a complete change. Recently Rock Financial, one of our corporate partners, requested a letter written by one of our participants. Joseph Moore jumped at the chance. Here is what Joseph wrote about his experience: 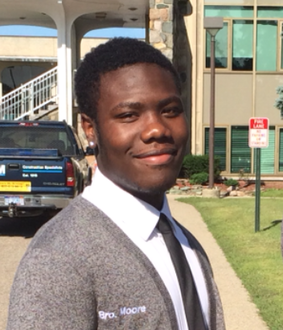 Dear, Mr. Dan Gilbert,
My name is Joseph Moore and I participated in The Manhood Project while I attended Winans Academy High School.  I am writing this letter to give you a big thanks for supporting The Manhood Project. This program had a very big impact on my life.  Before meeting Mr. Phil Black and joining the program, I can honestly say I was lost. I didn’t know what I wanted to do.  I didn’t even know if I would finish high school at one point. The first day of the program I thought to myself here goes another man trying to tell me what I should be doing. I didn’t like coming at first and I would only come for the snacks and all the cool events we was doing, like the Piston game. As the year went on and the circle of brothers became closer we began to love the manhood project. We all turned into a family, our conversations became deeper and we got to know each other on a greater level. The Manhood Project changed my whole life for the better. I became a leader among my other brothers and began to branch out into the young determine man I am today.  I really didn’t trust a lot of people because of what went on in my past but Mr. Black and my brothers help me and I began to trust again. Because of the program I not only graduated but Mr. Black got me accepted into Madonna University through another program. Mr. Black always says Presence over Perfection which means all you have to do is show up and you don’t have to worry about being perfect. I love the Manhood Project and everything it stands for. The Manhood Project is just not a mentoring program it’s a brotherhood and family. It’s a safe space where you can be yourself. So thanks again for supporting the Manhood Project Mr. Gilbert. We all appreciate you from the bottom of my heart. 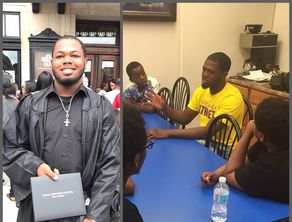 Manhood is one of THE BEST programs there is in DPS (Detroit Public Schools). It is one of the best that I have been in because Coach Black keeps it real and 100%. He tells us real stories and gives us real scenarios that we can critically think through. I have learned so much from being in Manhood, I can actually say that I understand myself a lot more. Now that I think back to when I first came, I really didn't speak much. I just listened and observed. One day we had a topic I just had to put my input in on. Ever since that day, I voice my opinions on stuff every session. Coach Black is kind-of more than just a mentor. And Manhood is more than just a program to me. I hope it never goes away.
Zyaire G., 2017 HS Graduate and three year TMP participant 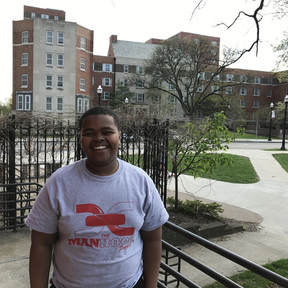 I wanted to be part of The Manhood Project for two reasons. One reason, is because I had an attitude and I wanted to make a change. The second reason is, so many men and boys in our age group see violence and think it is okay to do. So I joined Manhood to show being a boy/man isn't about guns and killing, it's about showing people you know how to act and be present. The Manhood Project helped me a lot. I use to think everything was cool I saw on the TV and on the streets. Now I am a presentable young man who gets A's and B's, with a 3.2 (soon to be higher) g.p.a. I feel Manhood should spread everywhere. I think it is a great influence to kids who are doing badly. It helps us see that we can become something in life even though some of us come from poverty. 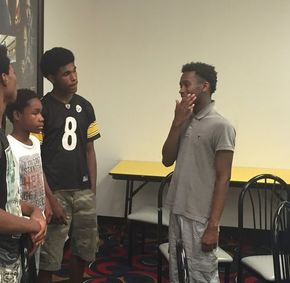 I have gained so much knowledge from The Manhood program. I have learned how important I am to this world and how much I can achieve by pushing myself and staying out of trouble. Manhood not just a program it's a family. It brought us, a group of young men together who would like to change their ways and be something great one day. The Manhood Project should be a program that never goes away. It brings young men closer. Coach Black taught me to look at life differently and to know how important I am to this world. I now believe one day I will change something in it one day.