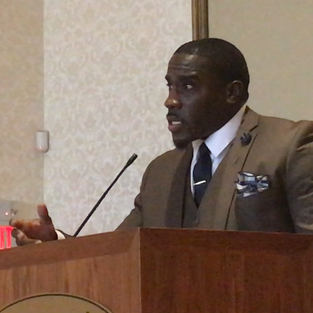 Phil Black is an Author, Inspirational Speaker, and the Founder of The Manhood Project (TMP). The Manhood Project is a coaching and personal development program designed to maximize the positive qualities of young men, while minimizing their temptations to engage in at-risk behavior. The program focuses on character building, development of communication skills, and personal exploration.

Like many young men, Phil was raised in a single-parent home by his mother. Though she did everything a child could hope for in raising him, the absence of his father left more questions than answers as he searched for guidance while becoming a man. Over the years, Phil faced countless emotional and physical challenges. On September 27th in 1997, he nearly lost his life to an act of gun violence. That incident changed Phil's life forever, and in many ways, became the driving force behind his work today.

Prior to creating TMP, Phil worked with an internationally recognized, education based nonprofit called City Year, LLC. There, he was able to use his background in Learning & Development to enhance staff and volunteer performance. Phil has also served as a Senior Program Manager, Learning & Development Expert, and National Sales Trainer. Currently, Phil also works with PEAR (Partnering in Education And Resilience)- a Harvard Medical School and McLean Hospital affiliate as a lead trainer, helping him to accrue more than a decade  of experience in youth training and human development.

In addition to his work with TMP and PEAR, Phil (or "Coach Black") holds dual certifications as a Life Strategies Coach and Youth Leadership Coach. Phil is a member of the BMe Community, founded by Trabian Shorters (formerly of the Knight Foundation), and is a member of the Detroit City Council’s Task Force on Black Male Engagement.

Past awards and recognition include: the Omega Psi Phi Fraternity Inc. Uplift Award for Community Service, Citizen of the Year Award from Clark Preparatory Academy, the 2013 BMe Community Leadership Award, Two time Spirit of Detroit Award recipient, the 2015 Torch of Wisdom Award winner for Scholarship, and his latest accomplishment- the recipient of the Presidential Award for Service.